22nd May - 3rd!
If you read my previous entry, you'll remember that I was a little disillusioned with racing after the previous week, finding it a little frustrating and tempted to take a break. However, as LBRCC was marshalling, I figured I would be there anyway so I would race. Plus, there would be a fair few clubmates to watch, which would be great. The weather was back to it's usual tricks, with the course having to be swept for washed off debris from nearby construction work. However, after the dry race the week before, I decided I prefer racing in the rain; I guess coming from Rochdale you learn to love the rain!

With 3 races experience in the bag, I was determined to try and be more assertive this week, getting onto the wheels I wanted, and keeping near the front. I decided to follow the wheels of the Abingdon based Outdoor Traders club, as there is always a few of them, and they work well as a team. Despite a few slips I managed to stay with them near the front, ending up on the front at one point but refusing to go hard enough to tyre myself out.

The 5 laps to go sign went up and I was still up around 5th, a good start but this is when the jostling for position really starts! Determined to stay up there, I worked hard to keep on the wheels of the OTCC riders at the front and did so until the bell went for the final lap. Adrenaline flowing, I could hear my heart pumping in my ears! The rider in front of me made a break as we passed the bell, and as second man I was in position to chase him down. I resisted the urge, and the shouts from others. Why should I chase him down so that everyone else could go past?! Good, I thought, assertiveness is the key! I was happy to keep my chances of a placing rather than lead everyone out again! A few riders went past in my hesitance but I was wary of this and accelerated to stay top 5.

As we approached the final climb and the sprint, I locked on to the OTCC rider I'd earmarked. The sprint started and we went for it! My legs nearly locked up with  the adrenaline but I forced myself to go. I had to idea where everyone else was, just the rider in front. The line approached quickly, and I expected the bunch to come past at any point. However, they didn't, and I crossed the line a few inches behind the OTCC rider for 3rd! My first placing and subsequent points! I couldn't believe it, in front of LBRCC clubmates too, a great time to do so!

29th May - 6th
My confidence was much higher after the previous week's success, and I was looking forward to racing again. The weather was possibly even worse for this race, but i was relishing the fact! There was quite a large field for the race, so I knew I needed to stay near the front, and I had the confidence to do so now.

From the off there were breaks, with some strong riders in attendance. There was a vet racing who marshalled us together and allowed us to chase them down efficiently, although a Twenty3c rider kept attacking relentlessly! I earmarked the vet to follow, as he was obviously strong, and not racing for points I figured he must have raced at a higher level.

Throughout the race my legs didn't feel brilliant, so I knew to finish anywhere  had to be in the perfect position. Fortunately my plan worked, and despite a crappy sprint, I finished directly behind the vet, taking 6th place and another 4 valuable points. It was a slight shame I didn't finish higher, as 1 more point would have put me into the 3rd Category, but I also figured more practice would be a good thing. Overall, I was pleased with the day.

12th June - 2nd! Promotion!
I took a week off racing at the bowl for the June 5th race, electing to do a Time Trial (see other post) just for a change. Last Thursday I was back with a vengeance, eager to get more points but a little nervous that anything other than top 10 would be disappointing after the previous success! 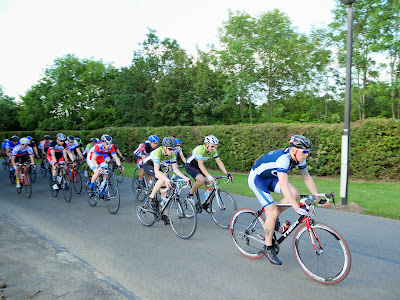 Being a dry night, the field was larger, which I'd struggled with a little last time, but I figured I had much more confidence now. There was a high pace from the start, but I managed to stay in the top 5ish, chasing down a few early breaks to get the legs going. After a few laps I messed up a corner, and found myself boxed in, Fool! I thought. I was a little worried I wasn't going to be able to get out and near the front again due to the number of riders, but I calmed down, saved my energy for a few laps then sprinted up the outside to get back into contention.

There was some really sketchy riding going on throughout the race, people veering around all over the place. One older racer lambasted another rider for about 2 laps, getting worked up and swerving in front of me at one point - pot, kettle! Another issue was the bottom corner, where for about the last 10 laps those on the outside kept taking the racing line, cutting those taking an inside line off completely. Cue a few instances of sharp braking! Not particularly sportsmanlike!

Anyway, the final 5 laps were signalled and the race pushed on. I tried hard to keep near the front despite lots of pressure, doing so until the final lap. A rider in front of me slowed up and I had to go around him on the inside, whereas the best line is the outside for the finale. This wasn't a disaster as such, but soon became one when I got cut off on the fore-mentioned corner, seeing any chance of a placing and promotion quickly slipping as the bunch sprinted away.

It did occur to me that the sprint had started early, enthusiasm taking over! I quickly got on a wheel and spun sitting down, passing those faltering on the uphill. As the wheel slowed, I screamed 'On the inside!', and stood up, opening the taps. I'd soon gone from about 20 back on the corner to passing those who started earlier, but no time to think about that. I followed the red skinsuit of 45RC rider who had a good line on the inside, oblivious to the position of the rest of the bunch. Maybe I could scrape a point for promotion?!

Finish line in sight beyond the 45RC rider, I had a quick look round to see how swamped I was. To my surprise, there was about 10m of air between us two and the bunch! I couldn't believe it, and crossed the line in 2nd behind the rider in red. We'd managed to go through the field and leave them! It took a minute to sink in, but I'd done it! Another 8 points meaning a comfortable promotion to Category 3!

Time to move up a race next time, which means going out of the gates on the longer circuit, which terrify's me! Still, no pressure means I'll take the time to learn the course, practice and devise a new strategy! No race this week due to a concert at the bowl, but I've got my first on road race on Sunday, the Ginger Smallwood Memorial race, which should be a challenge, but interesting!